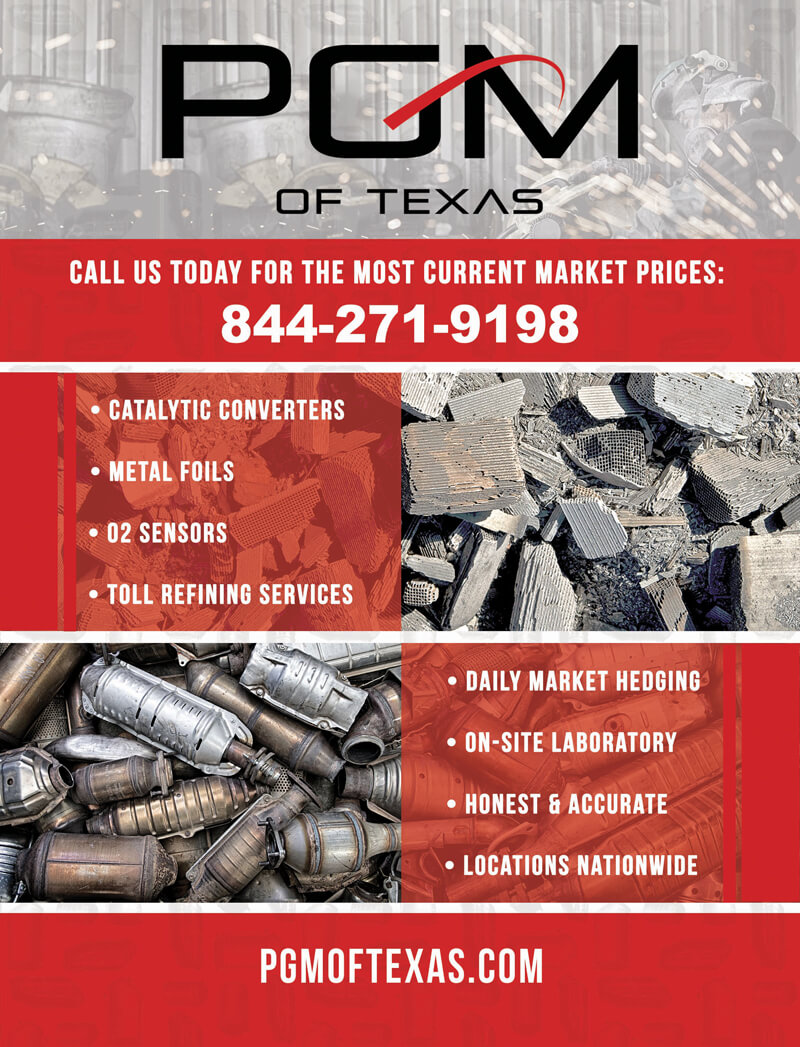 PGM of Texas, LLC (PGM), San Marcos, Texas, and Warsaw, Poland, a leading provider of catalytic converter recycling technologies and services, announced May 5, 2020 that it has partnered with an affiliate of Elemental Holding, S.A. (WSE: EMT), in a recapitalization transaction in 2019, representing Elemental’s entry into the United States’ market.

“PGM was ready to expand after experiencing significant growth over the course of 2017-2018,” said PGM’s Founder/CEO, Allen W. Hickman, Jr. “From my first meeting with Pawel and Krzysztof at Elemental in 2019, additional meetings in Texas and Poland, and through the closing in December 2019, it was clear that both gentlemen shared my vision for where the broader catalytic converter recycling industry was going. I’m certain that I have found with my partners at Elemental strategic partners that are fully aligned with me to grow PGM’s business in the United States.”

Representing PGM in the recapitalization transaction with Elemental were Ben Hanson and Tyler Sutliff from EQ Capital Strategies, LLC. Hanson stated: “Allen and his team articulated a compelling vision for where PGM was headed. We were excited to be beside him and his very capable team every step of the way – from preliminary discussions to transaction closing in December 2019.” Hickman continued: “I admire Ben and Tyler’s ability to move quickly, offer sound advice and for their in-depth knowledge of our operations additional growth plans.”

As PGM continues its robust growth, it now has the capital and strategic support to identify and acquire recycling companies from owners that are interested in diversifying concentrated equity holdings. In these unprecedented times, PGM values the opportunity to discuss whether a sale, merger, recapitalization or partnership transaction might be desirable. In the meantime, PGM continue to grow its business, enhancing its partnerships with and service offerings to suppliers and customers.

Hickman also announced the purchase of a new 90,000 square foot production facility in San Marcos, Texas, to be operational in July 2020. Hickman estimates that more than 35 new employees will be hired over the next 12 months.

The new facility includes a state-of-the-art lab and assay equipment and should allow PGM to double its historical productions volumes.

“This is an exciting time for our company and our customers. The partnership with Elemental and the opening of our new production facility are milestones that our team worked incredibly hard on, and I’m eager to accelerate our plans,” said Hickman.

Since 1999, PGM founders have grown to become one of the oldest and largest catalytic converters recyclers in North America. With capacity to de-can one million catalytic converters per month, PGM estimates that, through its partnership with Elemental, coupled with the addition of new sampling lines, it will be able to process more than 2 million pounds of automotive catalyst monthly. PGM’s headquarters and main plant are in San Marcos, TX, with additional processing capacity in Gulfport, MS. PGM operates additional yards in the following locations: Dallas, Houston, and Laredo, TX; Bow, NH; Charlotte, NC; Jacksonville and Orlando, FL, and Kansas City, MO.